Today is the annual update all your iOS devices day, thanks to the release of iOS 11, watchOS 4 and tvOS 11.  I have been running the public beta of iOS 11 on my iPad for over a month and on my iPhone for about 2 weeks.  Here is a quick review of the biggest changes in iOS 11 for iPhone, because the scale of the changes on the iPad is too big for anything quick.

The most dramatic change for the iPhone is the new Control Center.  You may not know its name, but  if you have an iPhone it is likely that you swiped up from the bottom of the screen to reveal a set of controls for turning on airplane mode, or most likely to use the flashlight.  It is the same area where you may have seen music controls when you were trying to find the flashlight and only after trial and error realized you could swipe right to find the page with the flashlight.

In iOS 11 the multi page Control Center is being replaced with a single page that is now much larger and contains lots of buttons of different shapes and sizes. 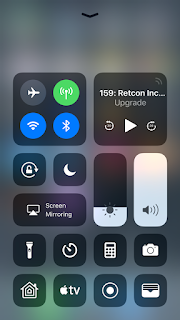 It takes a while getting used to all the new controls and what they do, but after a week or so it becomes second nature.  Simply tapping on the controls will perform the expected action, but if you long press or 3D Touch on some of they will reveal a more detailed control.  For example, long pressing on the flashlight will give you three options for brightness.

Not a lot has changed in the Messages app, but since it is used by a lot of people I wanted to point them out.  In iOS 10, the introduction of apps in Messages was a tent pole feature and they invaded the Messages app.  One downside to this was you had to do an extra tap to attach or take a pictures.  I know it doesn't seem like much, but it really annoyed me.  In iOS 11 apps in Messages are featured differently and as a result the camera is now only a single tap away. 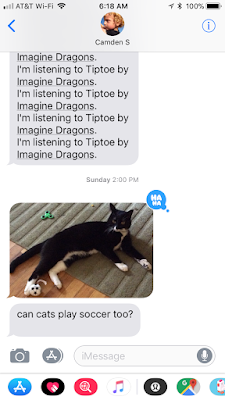 Now instead of using an arrow button to reveal the camera, the text input field is a little smaller and the icons for the camera and app store are always displayed.  A new row of apps is always displayed to help encourage their use, but in a nice and subtle way.  My only gripe about this new interface is once you type a certain number of characters the input field grows and it always "startles" me as the display changes.

One of my favorite features on my iPhone 6S is Live Photos.  I almost always forget to record video of different events and it is so nice to be able to see a brief snippet of video that I "accidentally" captures.  I generally leave Live Photos turned on, because why not.  In iOS 11, Live Photos is getting a couple upgrades.  My favorite is the new Live Photo Effects: Loop, Bounce or Long Exposure.  I know these already exist in apps like Instagram and Snapchat, but it is nice to be able to apply these effects after they are taken. 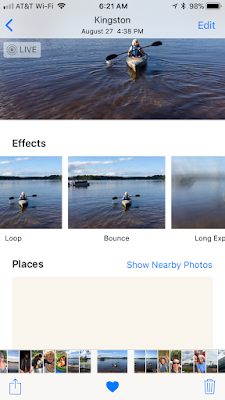 To access the Effects just slide the Live Photo up to reveal a live running example of what it will look like.  There is a slight delay as the effects are applied so be patient, but once they have loaded you can tap on the effect you like and the photo will be updated.  The first option is Loop, which tries to create a looping video that repeats over and over again.  The second option is Bounce, which will play the video forward for a certain amount of time and then reverse it for the same amount of time.  The last one is Long Exposure, which will basically overlay all the different frames together as if you left the shutter on your camera open for a long exposure photo, this works best for things like waterfalls or night shots.

Above are the changes I found to be most notable on the iPhone, but here are some more quick things you may notice.
UPDATE: Forgot to include Do Not Disturb While Driving, which will automatically turn on whenever your iPhone detects you are driving.  Any messages you receive will auto reply with a message that you are driving and the ability for the sender to resend with the word URGENT to bypass it.
Posted by Keegan at 9/19/2017 07:07:00 AM