In an earlier post I detailed the process I went through to unlock my iPhone 5 in preparation for my trip to Iceland. So I thought it might also be helpful to provide a recap of how it actually went.

After reading over the great post over at iheartreykjavik.net called To buy or not to buy an Icelandic SIM card, I decided to go with a Simmin card. Upon arriving at the Keflavik airport I immediately went to the Elko electronics store in the main shopping area and asked an employee there if they had Simmin SIM cards, they only had Ericcson brand, which I didn't want because of the coverage outside of Reykjavik. After getting my bags and seeing the signs for the Simmin cards on signs at the baggage claim I stopped by the Duty Free store, which also only had Ericcson. Finally, I took my chances at the 10-11 convenience store in the main lobby of the airport and they had a couple Simmin Nano SIM cards left. I bought the 2000 krona prepaid card, which I vaguely remember coming to 2900 krona. I didn't really care, I was just excited to have found the card at the airport. Here is the packaging. 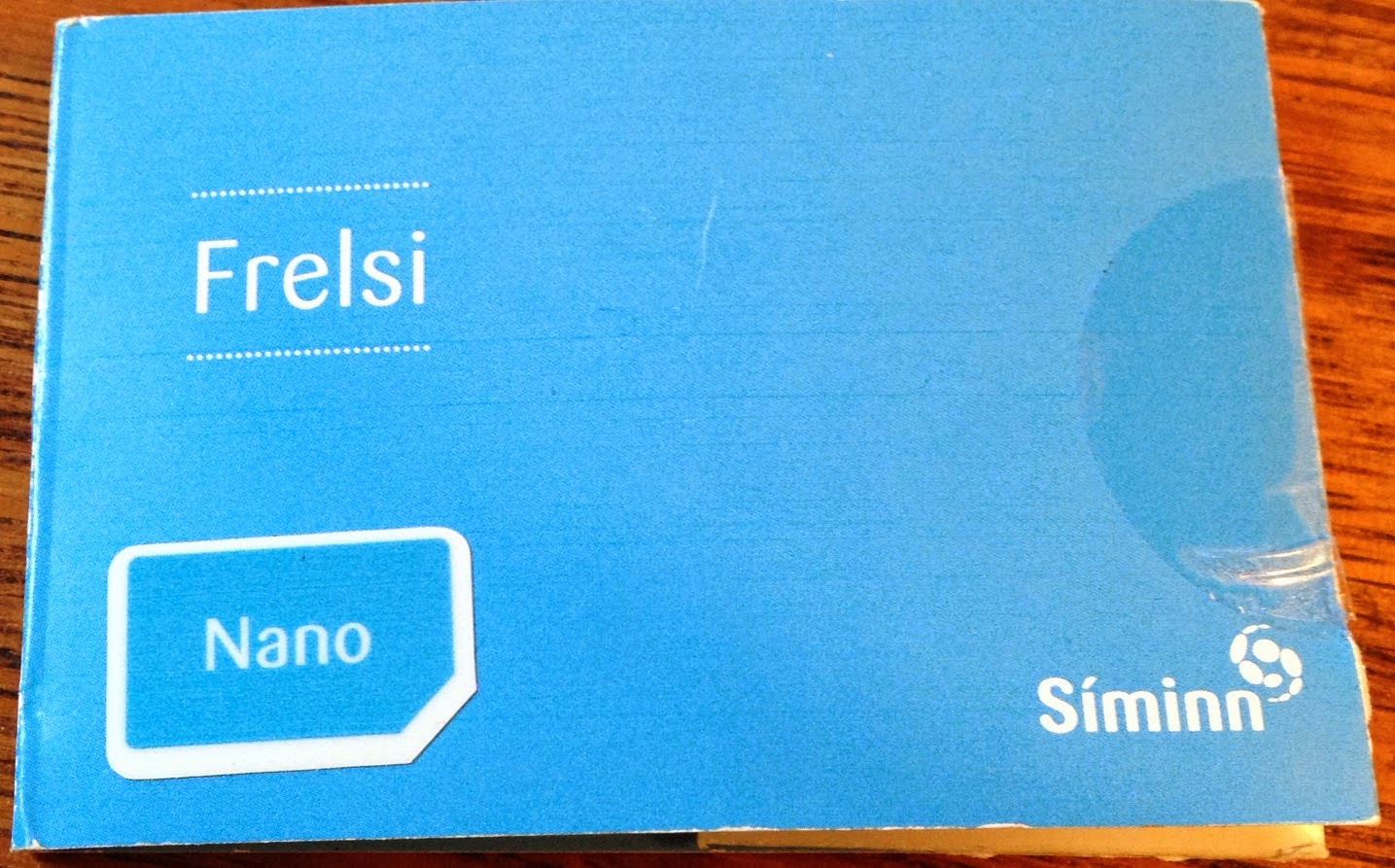 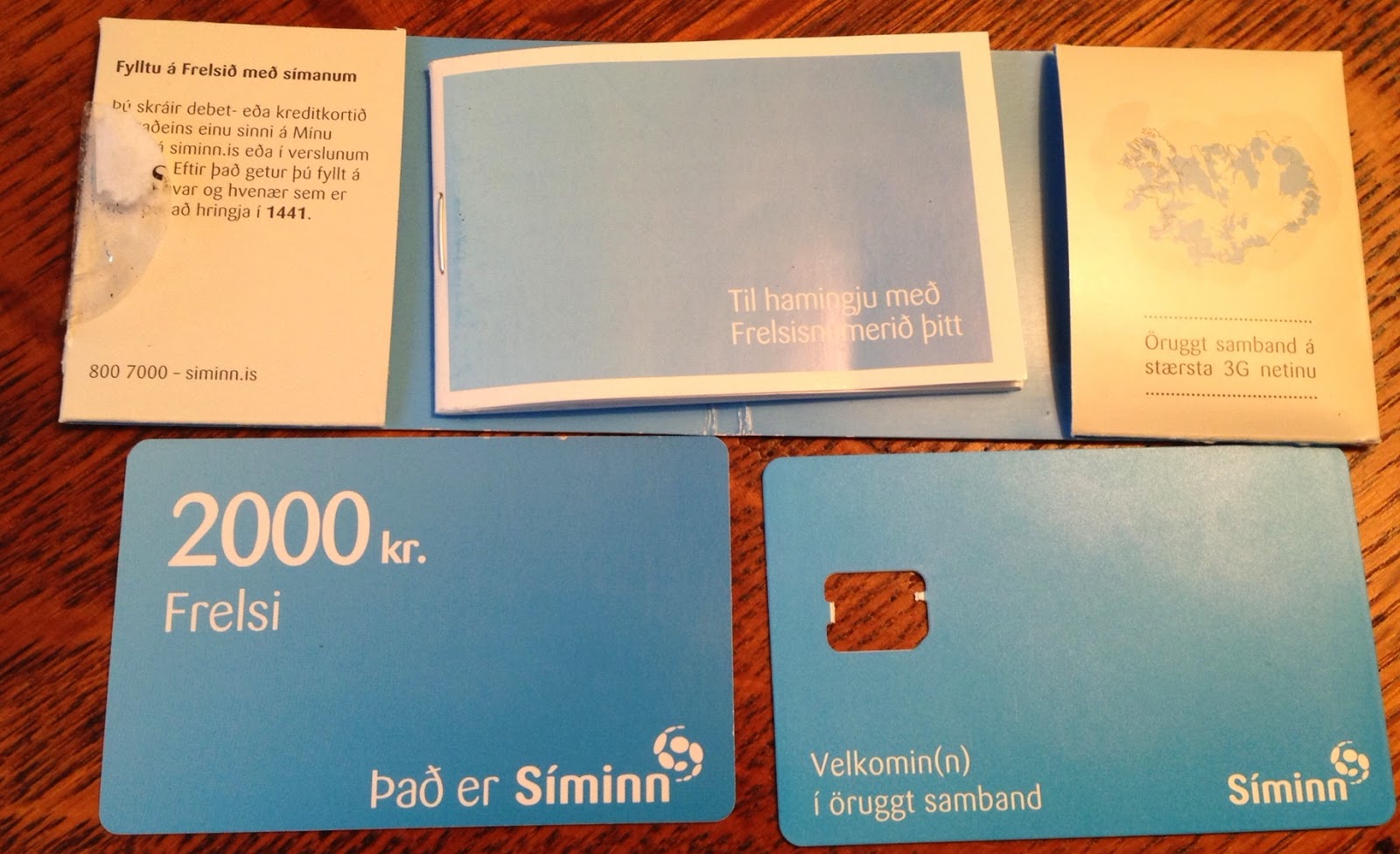 I convinced my wife to stop for a couple minutes so I could try to get the SIM card installed and thankfully she obliged. I found a corner of the floor where I could spread out my bag and got to work. The whole package was about the size of the credit card and opened up to reveal the 2000 krona prepaid card, a card with the SIM card and some instructions. The instructions were useless to me because they were only in Icelandic. So I guessed at it and did this:

The first stop of our trip was in Reykjavik for breakfast, with plans to drive to the hotel in Vik on the south coast that evening. I used the phone a couple times while in downtown Reykjavik for maps and various social media updates. During the drive it came in handy for a couple good searches and the service never fell to less than a couple circles formerly known as bars. At some point in the drive I got a text message in Icelandic, which I was quick to disregard. I finally made it to a scenic spot a few hours later and attempted to send a text message with little success, which I attributed to lack of signal because it was in the middle of nowhere. However, later on I learned that the phone wasn't receiving any form of data anymore. During the drive I tried to play some songs via the Music app with little luck, it appeared like they were playing, but no sound was coming out. I remained perplexed until I stopped and switched the phone into Airplane mode and tried playing music again with great success. I had found my aha moment!! I am an iTunes Match subscriber and even though I had downloaded a few albums for the trip, the phone was still trying to use the data connection for the songs. Since the music playing had worked earlier in the day I figured out that I had used up all of my prepaid data at that time.

Now that I had some idea about what was happening I went to the Simmin website to try and figure out how much money was left on the prepaid card, but couldn't really figure it out. Instead I just went to the Simmin Top Up Page to add more data, I went with the 1GB mobile month long data plan for 1290 krona. All I needed to do was enter the PUK number from above and enter my credit card information before I was back in business. The rest of the trip I made sure to flip to Airplane mode when playing music to avoid falling into the same trap again. The card worked fine for the rest of the trip.

I recently took a trip to Iceland and took photos with both my iPhone and DSLR camera.  The iPhone pictures made it into Aperture via My Photo Stream and I imported the DSLR photos manually.

After looking at the timestamp on the photos I saw that all of the iPhone photos have a time stamp of the local time, but the time zone is EDT instead of GMT.  The iPhone seems to know the local time, but for some reason the camera is using the old time zone. For example, one of the photos I took at 7:37 GMT had a timestamp of 7:37 EDT. In order to fix this in Aperture you can use the Batch Change functionality under the Metadata menu.


As for the DSLR, I never updated the clock on it so all the pictures had my native timezone of EDT.  In that case you just have to start at step 7 above and change them from EDT to GMT.
Posted by Keegan at 7/19/2014 08:32:00 AM No comments: