Mice have always been my peripheral of choice at work, mostly because I generally enjoyed using them and the alternatives never really appealed to me, e.g. track balls, joysticks, etc… My mousing style generally involves me lightly holding my hand over the mouse and using my thumb or ring finger on the outside edges to move it around. At home I use the Magic Trackpad because I do love the gestures, but ergonomically it causes discomfort for any extended sessions. In the area of keyboards I have used a Microsoft natural ergonomic keyboard for as long as I can remember. It is a beast with way more functionality than I will ever use, but it is so very comfortable once you get used to it. I especially appreciate it when I have to use a normal keyboard and my wrists are all bent and twisted, it usually gets painful after just a few minutes.

Over the last few months I have started to feel some soreness in my right wrist (the mouse one). Several things have changed over the past year that could be contributing to this. I started doing yoga about a year ago and maybe all the planks and downward dogs are weakening my wrists. My company moved into some new office space with desks that can raise and lower, so I have been doing the standing desk thing for the last seven months. Also since I am an anxious person it is very possible that listening to some of my favorite podcasters talk about Repetitive Strain Injury (RSI) planted the seed in my brain. Regardless I was concerned and wanted to get ahead of it, before it became a problem.

A few months ago I was listening to Cortex episode 11 where Myke and CGP Grey talked a little bit about Wacom tablets and how important they can be in helping you vary your input devices to prevent RSI. At the time I logged the discussion in my brain and kept living the mouse lifestyle. Given my recent soreness I revisited this podcast and started looking into Wacom tablets. I mostly did my research on wacom.com. The first step in choosing was to decide between a pen display and a pen tablet. Since I am just using it as a mouse alternative I don’t need the display and so I focused on the various pen tablets. Wacom seems to have simplified their branding over the last couple years and now use the Intuos brand name for all the pen tablets. The Intuos tablets are then cleanly split between a basic line and the the larger and more feature rich Pro line. I focused on the basic line since this is my first Wacom and I didn’t want to spend too much money. At first glance the basic line was a bit tougher to navigate because they have four different models: Draw, Art, Photo, and Comic. After much searching I learned that the Draw is only a pen tablet, while the other three support both pen and touch input. The only difference between Art, Photo and Comic is the software bundled with each one. Once I figured that out it didn’t really matter which of the three I chose because I wasn’t planning on using it for any of those particular uses. I ended up choosing the Intuos Photo because it seemed like the most likely software I might use. 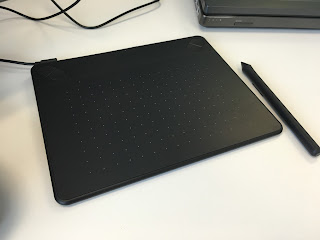 I received the tablet in the mail a couple days later thanks to Amazon Prime. I followed the simple instructions and had it up and running in just a few minutes. The guys on the podcast strongly recommended using the default pen setting which directly maps a location on the tablet to a specific location on your display, so clicking in the top right corner on the tablet will cause the cursor to jump to the to right corner of the display. Moving to the opposite corner just requires a quick tap on the bottom left corner of the tablet. For the most part my brain was able to quickly adapt to this mapping and I understood why it was the preferred setting. One problem I did have with simple navigation was when attempting to move the cursor to the bottom of the screen, it was awkward because rather than resting your hand on the tablet it has to be on the desk making for a somewhat awkward positioning of the hand.

Besides basic navigation the stylus has a rocker switch/button that is used for right click and scrolling. If you hold the button closest to the nib and drag it is the same as a dragging a finger on a touch screen. To right click you hover the cursor over the thing you want to right click and press to other button. The right click was harder to get used to because just the action of clicking the button would sometimes move the cursor causing an unexpected shortcut menu for something else.

I did struggle with some things that I hadn’t anticipated, which were interesting. I was very disappointed by the touch functionality of the tablet. I found the Wacom tablet isn’t nearly as smooth as the Magic Trackpad so my fingers didn’t slide across it as nicely. I also had some trouble with the multi touch gestures registering incorrectly. For example, whenever I tried to scroll up and down a web page using the two finger drag, the tablet would trigger a zoom action, because my fingers naturally come together as I drag up and down. I tried to shut off the zoom feature, but for some reason it didn’t make a difference.

The other unanticipated problem was the difficulty when transitioning from stylus to keyboard and back. I could easily put the stylus down, well except for when it started rolling toward the edge of my desk. The more difficult task was picking it back up and getting it positioned correctly in my hand. Half the time I would pick it up upside down and if I did manage to grab it nib down then I would spend a few seconds trying to get the rocker switch/button lined up underneath my index finger. Since I am coding I go back and forth between pointing device and keyboard very often, so one can imagine how frustrating this can be over the course of an 8 hour day.

It has now been over a week since I started using the tablet and most of my previous observations still are the same, although my accuracy with the right click has improved quite a bit and navigating to the bottom of the screen has become easier. I still struggle with picking it up and wonder if this type of input is ill suited for my type of work or if I need to invest in some sort of stylus holder that ensures the stylus is always pointing in the same direction.

One regret I have is converting over to the tablet completely for the first week without using the mouse at all except for a brief occasion when I was working on a critical issue. Towards the end of the first week I felt my hand cramping up a little bit and think it was because I tried to do too much too soon. Since then I have alternated between the tablet and mouse over the course of the day to give my hand a nice variety. So far so good.
Posted by Keegan at 3/01/2016 06:23:00 AM